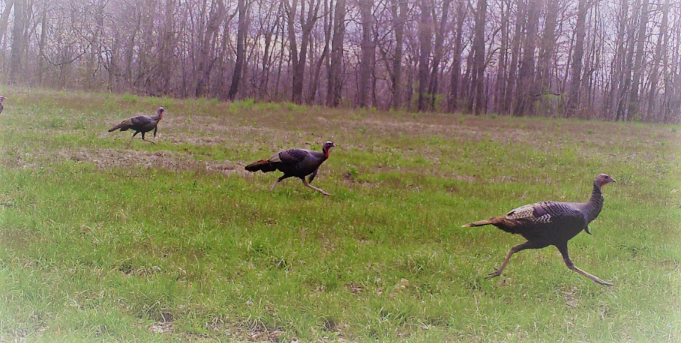 “How can a young person stay on the path of purity?
By living according to your word.
I seek you with all my heart;
do not let me stray from your commands.
I have hidden your word in my heart
that I might not sin against you.”

It was a warm Sunday afternoon in spring. After church I loaded up all my gear, got dressed head-to-toe in camouflage, and aimed my truck towards the turkey woods a few miles from my house. I turned the volume down on the Turnpike Troubadours “The Bird Hunters” and crept slowly down the path between two fields, watching for turkeys and trying to keep off the gas peddle so the exhaust wouldn’t announce my presence.

The sun was beating down, as it was an unseasonably warm April. It was one of those years when the seasons seem to switch from winter straight into summer, skipping spring altogether. I had a few hundred yards to trek to get to my spot. Walking across the field, loaded down with decoys, calls, and equipment made for a hot hike. I tried to walk slow enough to avoid sweating through my hunting clothes, but fast enough to get set up before being busted. I made it to the back of an old bean field and pulled my decoys from my backpack. After a couple minutes of fluffing out the flimsy foam hens, I began to press the plastic stakes into the hard, dry ground. I found a large tree to lean against about 15 yards away from the spread.

I yelped, clucked, and purred all afternoon on every type of call in my vest. Not a single gobble rang through the trees. I kept trying anyway, thinking “Surely these turkeys have to be coming through here eventually!” A few hours later, out of the corner of my eye, I saw three jakes working their way along the field edge heading towards my decoys. They never made a sound but they couldn’t help but get a closer look at what they thought were some hot, vocal hens. As interested as they were, they would not come into the 10-20 yard range that I was hoping I could draw them in to. Instead, they turned and started to take the long way around. When I saw they were not going to fully commit, I took my shot at 40 yards. The 20 gauge Remington 870 sang and the bird hit the dirt.

We can learn a lot about life from turkey hunting. More specifically, we can learn a lot about avoiding pitfalls in life from turkey hunting. Let me explain: When you are hunting spring turkeys, your goal is to imitate a female turkey as best as you possibly can. You want to sound like a hen, you want to have a decoy placed that looks like a hen. Sometimes you even want to scratch at the leaves on the ground to seem like a hen. Your main goal is to trick that gobbler into thinking he is coming in to meet a female mate.

This type of scenario for hunting turkeys works very well! The reason it works so well is because the tom is completely fooled into walking right into an ambush. He has no idea he is encountering anything but another turkey, until it is too late. He hears something in the distance that sounds just like a turkey calling out to him. That gets his interest. He has heard it a thousand times, especially this time of year. Then, as he gets closer, he sees something that looks just like a female turkey (your decoy). Now he is even more interested! He sees other turkeys every day, so nothing seems strange about seeing a couple hens feeding in a field. Everything about this situation seems totally normal to the male turkey. Not only does it seem normal, it is also highly attractive! As far as he knows, he is about to get a new girlfriend! He is right where he wants to be. Right in his comfort zone. He is strutting around and showing off. He is gobbling and calling out “Look at me! Don’t I look good?” It is just another day in the life of a turkey, until it ends up being his last.

Don’t Be a Turkey

Sin usually comes in the form of something familiar to us. Since it looks familiar, we don’t really see it coming. Everything seems natural, normal, even appealing. Like a turkey walking right into a hunter’s sights, it deceives us.

Eve was tempted in the garden by a serpent, which is one of the animals she and Adam were responsible for taking care of (Genesis 2:15). She was no stranger to serpents. Often times sin creeps up on us and slithers in without us knowing, just as the crafty serpent did (Genesis 3:1-4). Eve liked what she saw when she looked at the tree with the forbidden fruit in the middle of the garden. The fruit was pleasing to the eye and it was desirable. Not only did she come running into the trap Satan set, but she also brought Adam in with her (Genesis 3:6). She knew she was not supposed to eat of that tree. God made it clear that they were not to touch it. In fact, that was His one rule for them in the Garden of Eden. They knew better. However, during a short moment of weakness and lack of self-control, the fruit was plucked and a bite was taken. Like Adam and Eve, we think we have everything under control or that we can handle it, when in reality, we are falling hard. One minute we are walking peacefully in the garden. The next minute we are lying face down in the dirt.

“How can a young person stay on the path of purity?
By living according to your word.
I seek you with all my heart;
do not let me stray from your commands.
I have hidden your word in my heart
that I might not sin against you.”

One thing about turkeys is that the male does not normally seek out the female. Typically, the male stays put, gobbles, and struts around and attracts the females to him. Sometimes, though, the temptation is just too great. It is against the turkey’s better judgement that he gives in and heads towards the sweet sound for a better look. His natural instincts tell him to stay where he is. But when the young jake ignored those instincts and wandered closer and closer to my shooting lane, that is when he put his life, and the lives of his two companions, in danger.

In the same way, we as Christians can make choices that cause us to inch closer to sin. We must always keep our minds on Christ and keep our thoughts pure. Our job is to hide God’s word in our hearts and follow His commands. The only way to do that is to be reading the Bible regularly and to be in constant communication with God. If we know God’s Word, and we live according to it, we will avoid Satan’s stumbling blocks that cause us to sin.

Sin will creep up in things that look familiar to you as a way to make you stray from what you know is righteous and holy. It will be in the voice of a friend or peer that is encouraging you to go along with something that just doesn’t feel right. It may be in the friendly smile of a coworker that may not have been as innocent as you originally thought. Sin will start surfacing in many different ways, many of which may seem uneventful or unnoticeable. That is why you must always be on guard and always be on watch! Do not be deceived by the temptations of this world and focus instead on Jesus, so that you might not fall into sin.

Sin is not something to mess around with. Sin is deadly (Romans 6:23). Every step you take towards deceitful things and questionable circumstances could be your last. Before you realize it, you have gone too far.

Be alert. Be aware. Stay focused. It’s the only way to keep your head out of the dirt!

← My Year in the Bible
Comfortable Christianity →